“Growers that have adopted a fussy, perfectionist attitude toward pollination rather than letting nature take its course may not reap any benefits in a good pollination year, but they can gain a great deal in a poor pollination year. Half a crop in a poor year can be as good as a bumper crop in a good year, and nothing is more expensive than no crop at all.”(1)

As the number of available honey bee colonies for almond pollination nears capacity, a potential shortage of hives is on the horizon. A significant part of the solution could be to re-evaluate the industry’s metrics to determine the optimal pollination input. For the last 50 years, the industry has been using a stocking rate of an average of 2 hives per acre. However, advances in data analytics make it possible to calculate more precisely the optimum pollination force for a given situation, expressed as the number of bees (or frames of bees), taking into consideration issues such as tree density, age, local climatic conditions, etc.

Along with soil fertility, irrigation, and pest management, pollination forms the productive almond crop’s backbone. As providers of precision pollination services, we at BeeHero have made it our business to research, model, test, and apply the most accurate formula for assessing a grower’s pollination needs. In this article, we will guide you through the processes that underlie our precision pollination planner. Various factors are explored, but it’s worth remembering that the interplay of these factors underpin the dynamic model we have developed precisely to assess every block of almonds’ needs.

Bees visit almond flowers readily, so the number of bees necessary to pollinate those flowers should ideally match the number of flowers that the tree’s output, bearing in mind that individual bees will visit multiple flowers and make numerous trips during their time at the orchards. Flower density of a particular tree and hence the orchard depends on a series of factors. It is worth noting that research has shown that the higher the flower density, the higher the fruit density, until the maximum that the cultivar can bear(2). Consequences of too few bees are easily perceived, but having more bees than you need, although not as obvious, has its downsides also. Optimized pollination service aims to create savings for both the grower and the beekeeper, but just as importantly, it is rooted in safeguarding bee health. Now let us explore the factors that form the foundation of the pollination calculator.

Plant age directly affects almonds’ reproductive potential. In the first three to four years of life, the trees do not produce flowers. Between the ages of 4 to 7 years, the trees develop dramatically, and so does the number of flowers on them. FrThe orchards are termed mature from years 7 to 17; the flower output is at its maximum and stable. After 17 years, the flowering capacity diminishes somewhat so that orchards are generally replanted after 20 to 25 years of age.

Planting density influences the total number of flowers in a given area. Still, this parameter has varying effects during different orchard ages and is also dependent on the cultivar and the rootstock. The higher the density, the higher the number of flowers expected per acre in the immature orchards where trees are not fully developed. However, as the orchards mature, this effect diminishes as f individual trees’ canopy grows out and fills in the spacing. This is particularly evident in large and vigorous growing cultivars(3) such as Nonpareil, and the opposite is true for smaller cultivars such as Carmel. Thus, planting density and the proportion of big and smaller cultivars, and the orchard’s age all amount to the actual number of flowers that the orchard outputs.

Previous years’ yields have been suggested to influence the carrying capacity of the tree the following year. It is often quoted that almond trees are alternate bearing, meaning that one year’s massive crop competes with the crop the next year. However, research has shown that the annual fluctuations observed in almonds are more likely to be caused by year-to-year variations of parameters affecting fruit set and that there can be large yield differences among trees in the same orchard. Thus, the relative value of the impact of the previous year’s yield will continue to be honed as we gain better insight into the causes of yield variations among trees in orchards and the bearing behavior of individual spurs, and the development, growth, and physiology of individual trees(4).

Climatic conditions affect both bees and almond trees in several ways. Almonds, as most temperate deciduous fruit trees, require an accumulation of winter chill and subsequent heat during their dormant phase to resume growth and initiate flowering in the following spring. The interplay of these two parameters will determine both the start date of bloom and the length of the bloom(5). These data inform the timing of the introduction and removal of bees to the orchards. More importantly, the bloom’s length and climatic conditions during the bloom will significantly affect the number of bees needed to pollinate the available flowers effectively. To illustrate this, if a prolonged bloom coincides with good weather, a smaller pollination force will suffice, whereas rapid blooming and poor weather calls for the more abundant deployment of bees.

Cover crops have gained considerable popularity over the last few years as numerous field studies have demonstrated their benefit to soil health and water balance. Moreover, in almond orchards, they have been shown to bolster the honey bee pollination force by providing high-quality forage to bees before almond bloom resulting in stronger colonies. Stronger colonies, in turn, have higher pollen collection requirements and are therefore more efficient pollinators(6). Consequently, an adjustment to the number of frames per acre can be made.

As the number of available honey bee colonies for almond pollination nears capacity, a potential shortage of hives is on the horizon. A significant part of the solution could be to re-evaluate the industry’s metrics to determine the optimal pollination input. For the last 50 years, the industry has been using a stocking rate of an average of 2 hives per acre. However, advances in data analytics make it possible to calculate more precisely the optimum pollination force for a given situation, expressed as the number of bees (or frames of bees), taking into consideration issues such as tree density, age, and local climatic conditions.

5.  Alonso, J.M., Anson, J., & Espiau, M. (2005). Determination of Endodormancy Break in Almond Flower Buds by a Correlation Model Using the Average Temperature of Different Day Intervals and its Application to the Estimation of Chill and Heat Requirements and Blooming Date. Journal of the American Society for Horticultural Science, 130, 308-318. 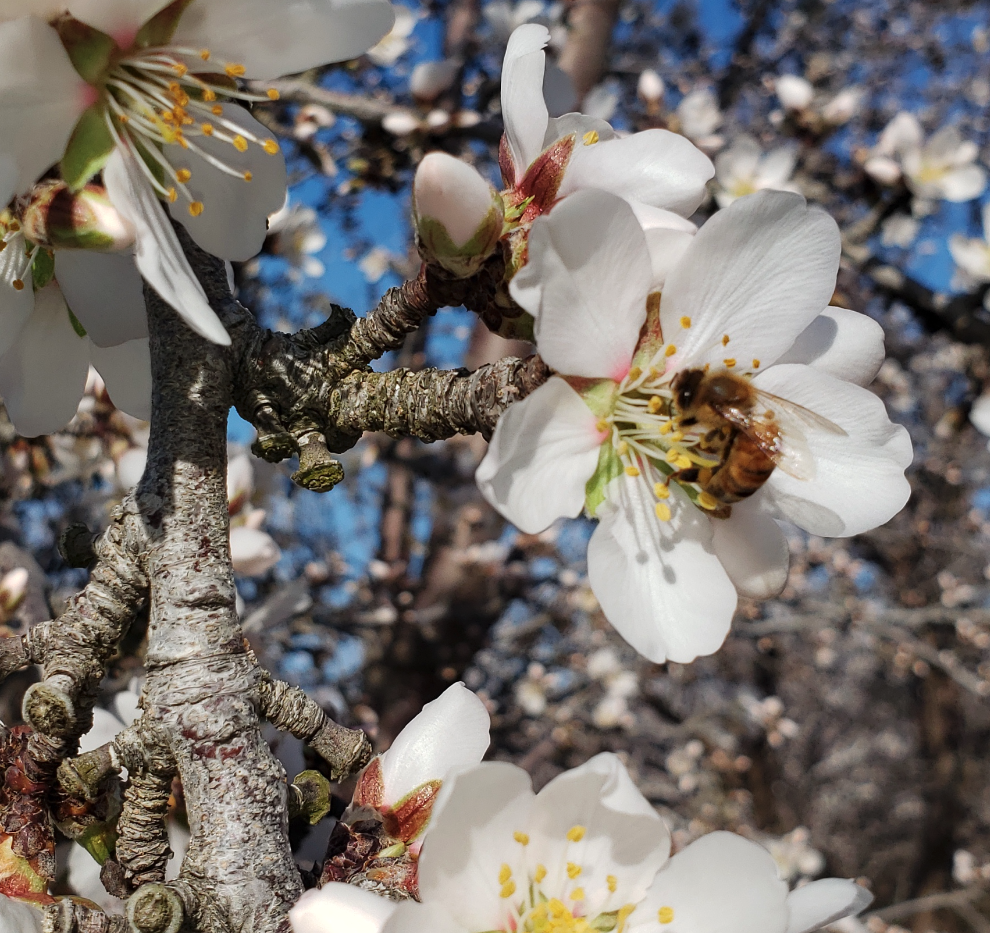 A recent study has identified the true pollinator dependence of the self fertile Independence almond variety. Fruit set was 60% higher in bee pollinated trees, which translated into a 20% increase in yield and 10% increase in net profit. 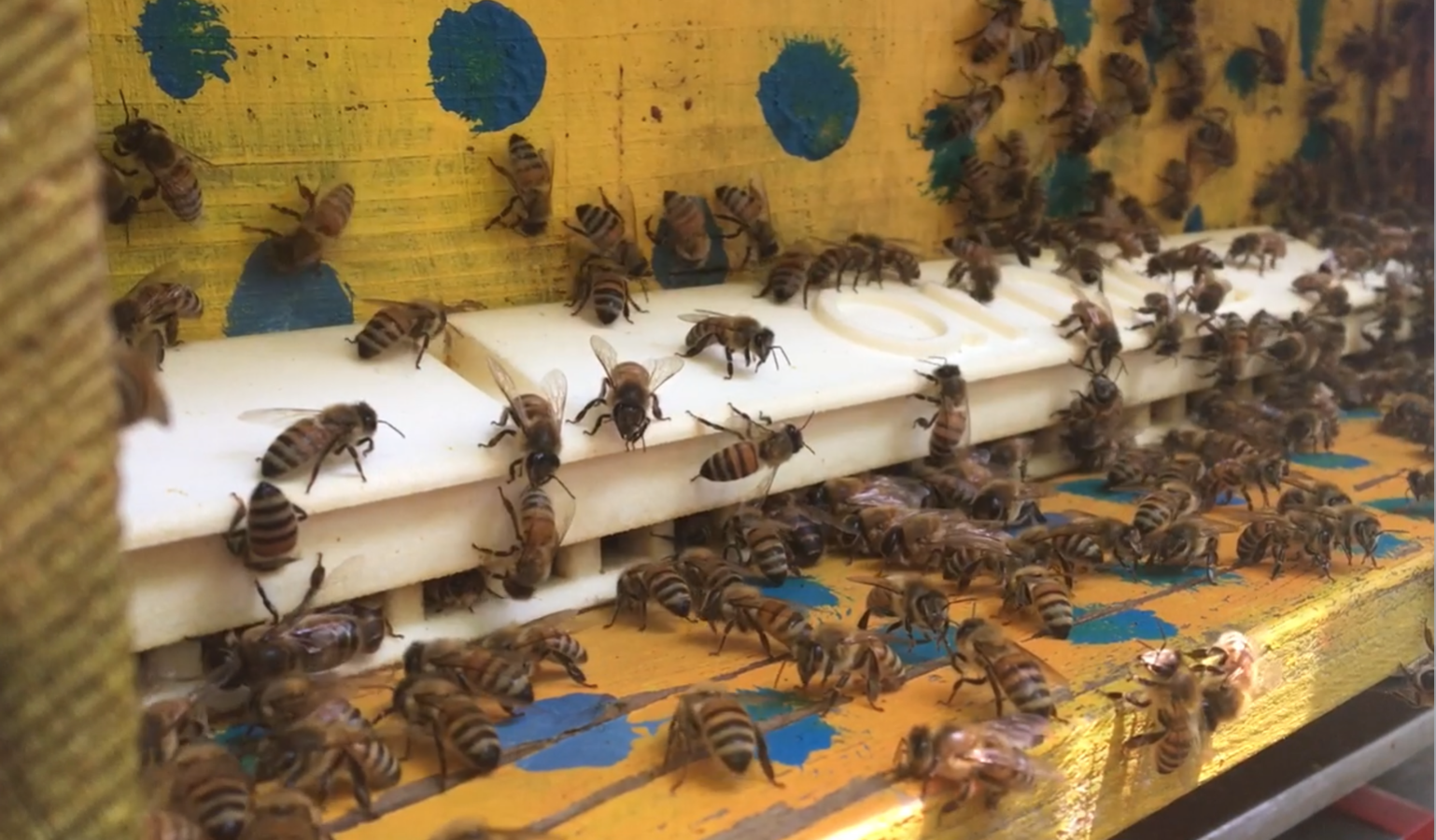